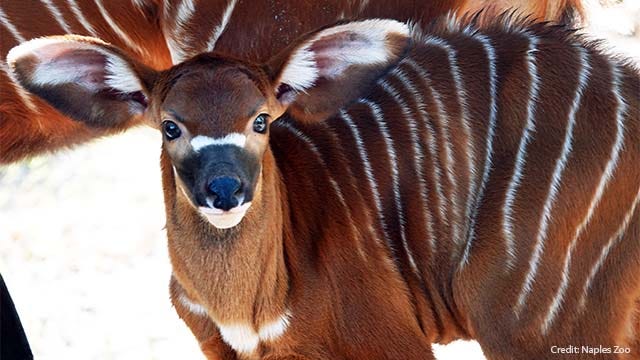 COLLIER COUNTY, Fla. – Beware of the Naples Zoo: those who visit might experience cuteness overload.

The Naples Zoo is booming with babies and had 15 live births in 2019 — the most it’s ever had in its 50 year history.

Their most recent birth was an endangered eastern bongo. Born to 4-year-old mother Amara, a male calf arrived on Dec. 30 weighing in at 48 pounds and measuring 2 feet tall. Bongos can weigh between 525 pounds and 880 pounds when fully grown and are the largest of the forest antelopes.

The calf received an exam from the zoo’s staff veterinarian after birth and was deemed healthy and thriving. Once the calf becomes accustomed to his mother, he will be introduced to his father, brother and the exhibit for public viewing.

Wild bongo populations have been on the decline, but accredited zoos have been breeding them to help sustain their population. Four out of the five species born to the Naples Zoo in 2019 are part of the Association of Zoos and Aquariums Species Survival Plan, which is a national plan to help create sustainable populations of threatened and endangered species.