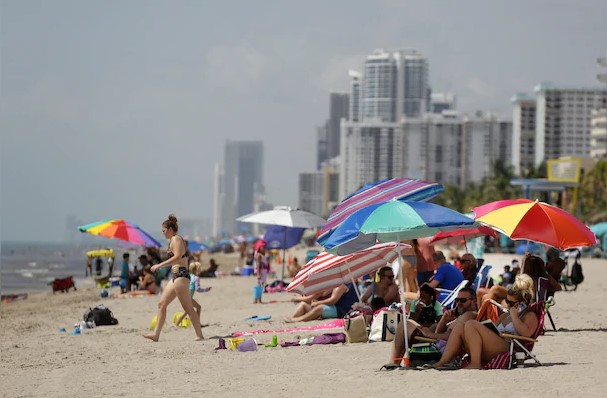 Nearly a thousand people are moving to Florida every day, as those living in high-tax states seek shelter during the coronavirus pandemic.

Home sales have doubled in some parts of Florida, and the state is bringing 950 new residents in per day, The New York Times first reported, citing data from the International Sales Group’s summer 2020 Miami Report and an August report from Douglas Elliman.

“Florida has consistently been one of the most desirable states in terms of weather and tax climate, maintaining a strong daily average population growth throughout the last couple of decades,” the Miami report notes.

Migrants have been flocking to Florida from Northern states such as New York, Illinois, New Jersey, Connecticut, and Massachusetts based on tax return filings.

“The U.S. is experiencing a domestic trend toward and population shift from states in the Northeast and Midwest to states in the South like Florida and Texas,” the Miami report states. “According to U.S. Census data, Florida had the highest level of net domestic migration from 2017-2018.”

The Elliman report found that new contracts for single-family homes and condos continued to surge in five Florida counties after doubling in July. Palm Beach County saw a 268-percent increase in single-family home contracts worth more than $1 million in July.

Meanwhile, new single-family home and condo contracts in a number of New York boroughs and suburbs except for Brooklyn and The Hamptons are also lower than years prior, but higher than they were in April, according to an August Elliman report.

Jonathan Miller, president of real estate appraisal firm Miller Samuel, which prepared the Elliman report, told the Times that for Florida home and condo buyers who were on the fence about moving, “the pandemic forced the issue, the recognition of advantages that weren’t fully appreciated before.”

Florida residents pay no state income or estate tax and get homestead exemptions of up to $50,000 on primary residences, as well as a 3% cap per year on home assessments, Jill DiDonna, senior vice president of sales and marketing of developer group GL homes, told the Times.

New Florida residents told the Times that they were able to get more space and better-quality homes in their price ranges compared to the states they fled from. For some, coronavirus accelerated plans to move.

How to Spot a SCAM Rental,

Distillery in Fort Myers filling up bottles with hand sanitizer for public,